The people of Sierra Leone are known for their friendliness and hospitality. Music and dance are an essential part of their daily life. @ Pablo Bianco

Built in 1482, the UNESCO World Heritage Site of Elmina Castle stands as a grim reminder of the tragedy of the transatlantic slave trade.

Common Dolphins travel in large groups of hundreds or even thousands. They are energetic and acrobatic, and can often be seen leaping out of the water. @ Jonathan Rossouw

The people of Ivory Coast honor their ancestors with traditional dance and the mask represents their loyalty to the past.

At 9,200 feet, the still-smoldering stratovolcano, Pico do Fogo, is the highest elevation of Cape Verde and also its largest volcano.

At Agadir, keep watch for the exceedingly endangered Northern Bald Ibis. It is believed that only 300 pairs still remain. @ Ignacio Yúfera

The 240-guest Silver Cloud is a spacious and comfortable expedition vessel with plenty of deck space for observing natural wonders and marine wildlife. @ Pablo Bianco

The word “vibrant” may just be overused in descriptions of African allure. You see it in poetic nods to Ghana’s famously bright textiles; to the sounds of samba and mbalax wafting from every open Senegalese door; the buzzing of positive energy in even the most war-pocked Monrovian streets. It’s a too-oft-used adjective, maybe, but it is not wrong. Join Apex on this rare and wondrous West Africa cruise. Visit rural villages and UNESCO heritage sites to learn of regional cultures, from traditional healing practices to the difficult history of the slave trade. Search for a kaleidoscopic array of bird specials, including the incredibly rare Northern Bald Ibis. Visit orphaned Chimpanzees in Sierra Leone, and smoldering volcanoes in Cape Verde. It will be a feast for the senses, in every respect, for this part of the world is beautiful, unspoiled by tourism, and, yes, undeniably vibrant. 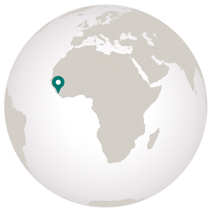 The Northern Bald Ibis: A Symbol of Virtue, Fertility, and Life

The rare and endangered Northern Bald Ibis is a large and striking bird with a black feathered body and a face without any feathers. This bird once had an extensive range that spread across North Africa, the Middle East and Europe. Today, 99% its wild population is found in Morocco, where it is believed that only 300 pairs still remain. The Northern Bald Ibis was worshipped by the ancient Egyptians who regarded the Nile as the source and protector of life. The Northern Bald Ibis, which appeared during the annual flooding of the river, was considered a symbol of virtue, fertility, and life. In fact, the Northern Bald Ibis can be seen in hieroglyphics from 5,000 years ago.