At Ölgii’s annual Golden Eagle Festival, more than 100 skilled hunters will compete in tournaments that test the bond between hunter and bird. © Nomadic Journeys

Along the way, travelers will experience staying at a private Ger camp, the traditional Mongolian nomadic housing. © Kevin Clement

Argali are the largest of the wild sheep. The impressive horns and skull of a ram can be up to 13% of their total body weight. © Richard Reading

Bactrian Camels have two humps for storing fat and can drink up to a quarter of their body weight at one time. © Nomadic Journeys

Wedged between Russia, Kazakhstan, China and the rest of Mongolia, Western Mongolia has always been a patchwork of ethnicities and traditions. Wild, rugged and remote as it is, these traditions have endured longer than in most places on Earth. Here, customs such as eagle hunting and khöömii (throat singing) still thrive. Here, the great Snow Leopard still prowls and the world’s last great wild horse, the Takhi, still roams on the plains. Join Apex on this special 17-day Mongolia tour, the only such tour incorporating both Snow Leopard tracking and the magnificent Golden Eagle Festival near Ölgii. Experience timelessness and vast wilderness in the true Wild West of Mongolia. 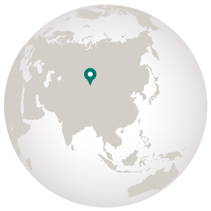 The culture, traditions and people of Western Mongolia draw Kevin back time and again. END_OF_DOCUMENT_TOKEN_TO_BE_REPLACED

Gerald is looking forward to tracking the solitary and elusive Snow Leopard. END_OF_DOCUMENT_TOKEN_TO_BE_REPLACED

The Silent and Shy Snow Leopards of Mongolia

Known for its beautiful fur and elusive behavior, the endangered Snow Leopard is found in the rugged mountains of Central Asia. Very rare in most of its range, scientists estimate that just 3,500 to 7,000 individuals remain in the wild. Snow Leopards prefer to inhabit steep cliff areas, rocky outcrops and ravines that provide the camouflage they need to ambush unsuspecting prey. Unlike other big cats, Snow Leopards are unable to roar. They silently stalk their favorite prey, primarily wild sheep and goats. Their long and powerful hind limbs help Snow Leopards leap up to 30 feet, which is six times their body length. A long tail provides balance and agility and also wraps around the resting Snow Leopard as protection from the cold.