Western Lowland Gorillas inhabit some of Africa’s densest rainforests, where they find plentiful fruit, roots, and shoots for their vegetarian diet. © Giovanna Fasanelli

The tusks of the Forest Elephant—a common visitor at Mboko Camp—are straight, instead of curved, helping it move through dense forest with greater ease. © Odzala Discovery Camps

Dzanga Bai, a clearing in the rainforest, attracts Forest Elephants, Western Sitatunga and the elusive Bongo to its mineral-rich waters.

The geographic heart of Africa, where gorillas, elephants, and Chimpanzees still live out their lives with little to no human contact, has often been called the “last place on Earth.” The vast majority of Congo is covered by virtually untouched tropical rainforest, home to the world’s largest populations of Western Lowland Gorillas and Chimpanzees. Dzanga-Sangha Special Reserve in the Central African Republic is a wild and rarely-visited area, harboring some of the highest densities of Forest Elephants, as well as Western Lowland Gorillas, and numerous other primate species. Here, in the national parks and reserves of the Republic of Congo and Central African Republic, we also find a diverse array of antelopes and birds in staggering concentrations. Join Apex on this expedition through the unspoiled forests and isolated savannahs of the Congo basin, and count yourself among the very few visitors to experience this primordial Eden. 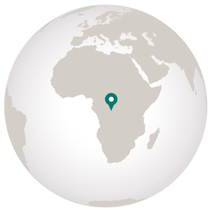 The Black-bellied Pangolin—a rare and most unusual mammal

The Black-bellied Pangolin, also called the Long-tailed Pangolin, spends most of its life in the canopy. Its tail can be as long as two feet, almost twice the length of its body. With 46-47 vertebrae—a record among mammals—the tail is strong enough to support the pangolin’s entire body weight while dangling from a tree. Somewhat of an oddity in the animal world, the pangolin is the only mammal with scales. While most of its head, body and tail are covered with horny, overlapping scales, the Black-bellied Pangolin’s abdomen and face are covered in dark fur. The scales serve as camouflage, as well as protection—when threatened, pangolins roll into a tight ball, exposing only their sharp scales. In fact, the name ‘pangolin’ comes from ‘penggulung,’ the Malay word for ‘something that rolls up’.