Comprised of rolling moorlands and rugged coastlines, Fair Isle is one of the best places to watch seabirds, especially puffins, at close range. © Anthony Smith

The 114-guest Sea Spirit is ideally suited for exploring. Her small size and maneuverability allow you to reach places inaccessible to larger ships.

Built in the 14th century, dramatically-situated Dunluce Castle juts out over the sea, affording visitors breathtaking views of the coastline. © Giovanna Fasanelli

Great Saltee Island is not only a haven for seabirds, it’s also home for a breeding population of Grey Seals, one of the very few in eastern Ireland. © Giovanna Fasanelli

The remains of a 6th-century monastery with its well-preserved beehive huts, are perched atop the island of Skellig Michael. © Giovanna Fasanelli

Rarely seen by visitors or locals alike, the British Isles begs for a wider discovery of its offshore islets, rock stacks, lonely lighthouses, and hermitages. Long abandoned by the intrepid medieval settlers, Britain today boasts a plethora of island sanctuaries where time has stood still. This Apex itinerary offers a wonderful mixture of English gardens, seabird citadels, such as the Skellig islands, and even haunting Iona, claimed resting place of Macbeth. What makes this expedition so perfect is its timing. Towards the end of May, observe the start of what the locals call “Flaming June,” summer arriving, at last. Seabirds will have completed their pre-laying exoduses, garden birds abound, and the wild flowers will be at their brightest and most fragrant. Join us on this finely-crafted British Isles cruise, perfectly-timed to explore the “wilder side” of Great Britain. 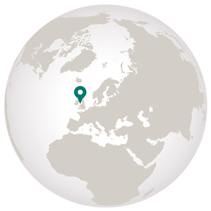 Meet the Colorful Clowns of the Sea!

Atlantic Puffins spend most of their lives at sea, but return to land to form breeding colonies during spring and summer. They usually pair with the same partner, reuniting at the same burrow site each year. Females lay a single egg and both parents share incubating duty. When the chick hatches, its parents take turns feeding it by carrying small fish, like herring or sand eels, in their beaks—in fact puffins are one of the few birds able to do so thanks to a unique hinge to their beaks. During the breeding season the male puffin’s beak turns bright yellow and orange, earning these birds their common nicknames: “sea parrots” or “clowns of the sea.”