Sri Lankan Leopards hold a unique position at the top of the food chain due to the absence of the larger cats. Observations reveal them to be bolder and more social than the rest of their species. © Jonathan Rossouw

The remains of the palace of Sigiriya, considered to be one of the best-preserved examples of ancient urban planning, sit atop a giant megalithic rock. © Gary Krosin

Sri Lanka’s name among early Arab traders was “Serendib,” a word that gave rise to our “serendipity.” And it was fitting, as this island nation, located a mere 20 miles off the coast of southern India, is a vibrant confluence of distinct cultural history and pristine, wildlife-laden national parks and beaches. Hike to mist-shrouded Buddhist monuments, stroll through rolling green tea plantations, trek in national parks teeming with endemic fauna, and encounter Blue and Sperm Whales off the palm-studded southern coast. See Asian Leopards, Purple-faced Langurs, Asian Elephants and Sri Lanka’s national bird, the Ceylon Junglefowl, amidst a jaw-dropping variety of other mammals, birds and butterflies on this 15-day Sri Lanka wildlife tour through the “Pearl of the Indian Ocean. 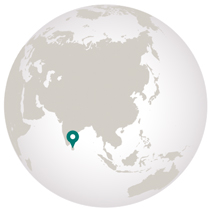 The Leopard is the quintessential cat, famous amongst wildlife enthusiasts for its power and feline grace. What’s less well known is that it also holds the distinction of having the widest distribution of any terrestrial mammal, ranging throughout Africa and across Asia to Sumatra and Far Eastern Russia. Though widely distributed, they’re always elusive, and Sri Lanka’s Yala National Park offers one of the very best opportunities to experience this exquisite apex predator in the wild.