The Coquerel's Sifaka is a sight to behold, either dancing on land or flying mid air. © Jonathan Rossouw

The Common Brown Lemur spends 95% of its time in the upper layers of the forest and a mere 2% on the ground. © Jonathan Rossouw

Male Panther Chameleons, in a form of sexual dimorphism, are more brightly colored than the females. © Jonathan Rossouw

Restricted to the northern tip of Madagascar, the Northern Sportive Lemur is arboreal and nocturnal, clinging to trees with pads on their hands and feet. © Jonathan Rossouw

Berenty Reserve's deciduous gallery woodland is justly famous for the ease with which its lemur species, like these Ring-tailed Lemurs, can be seen and appreciated. © Giovanna Fasanelli

Madagascar is home to one of the most unusual wildlife assemblages on Earth, its exceptional fauna and flora having evolved over millions of years of isolation. This Madagascar safari reveals a remarkable diversity of habitats, on an island often referred to as “The Eighth Continent.”Madagascar’s legendary uniqueness is reflected in its mammals, with every one of its 150 native terrestrial species being found nowhere else on the planet! Best known as the home of the lemurs, with an amazing 100 species divided over five endemic families, the island also boasts a host of colorful chameleons, fascinating flora, and bizarre insectivores. Madagascar’s endemic birds are equally renowned, with no fewer than 140 species and 5 complete families entirely restricted to this appropriately named “laboratory of evolution.” Join us on this Madagascar tour and discover the world’s greatest wildlife destination. 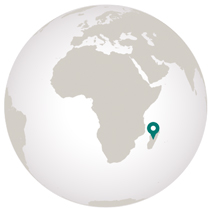 In addition to all tour services from arrival in Johannesburg, trip price includes all gratuities, services of one Apex expedition leader for each 7 guests, air within Madagascar*, plus local beer and wine with lunch and dinner daily.* Please note the flight from Johannesburg to Antananarivo is not included and should be booked as part of your international ticket.

Captivated by endemism, Marco delights in the variety of mammals, birds, chameleons and insects on display. END_OF_DOCUMENT_TOKEN_TO_BE_REPLACED

The Peacock Day Gecko is yet another drop-dead gorgeous creature that hails from this animal-rich wonderland. Having been widely introduced to the Florida Keys and Hawaii by reptile enthusiasts, the true origin of the luminous green lizards known as day geckos is often mistaken! Unlike the cryptic chameleons and leaf-tailed geckos, these beauties are a conspicuous feature of Madagascar’s humid eastern forests. A cursory glance over any tree trunk, palm frond or windowsill is all that’s required to find these cheeky parcels of turquoise, green and blue.