White Rhinos are more sociable than Black Rhinos and can be seen grazing in large groups of seven individuals or more.

The exquisite Mara Plains Camp inside the Olare Motorogi Conservancy is nestled in lush forest on a bend of the Ntiakitiak River.

Male Lions start to grow their manes around the age of two. The size and coloration of the mane are signs of the male’s dominance and fitness.

Explore Kenya’s “Wild North” by helicopter, flying over the lush Laikipia Plateau and into the Suguta Valley to marvel at the desolate landscape.

Enjoy an overnight at the iconic Giraffe Manor in Nairobi where the curious residents may decide to greet you in a most unusual way.

See abundant wildlife and some of the most dramatic landscapes on the African continent at Ol Jogi Wildlife Conservancy.

Kenya is the original birthplace of “Safari”. Lying on the Equator, and straddling Africa’s Great Rift Valley, it’s varied landscapes and wildlife riches are unmatched on the continent. Sadly, this same diversity and accessible location to Europe has made it something of a victim of its own success, its legendary wildlife reserves often choked with zebra-striped safari vehicles and selfie sticks. Fortunately, true wilderness awaits the intrepid explorer. Join Apex on an ultimate air safari through four of the country’s most remote private game reserves and exclusive concessions. Explore from the Masai Mara’s endless plains to the impossibly rich thorn savannahs at the foot of Mount Kilimanjaro, the shores of fabled Lake Turkana to the Laikipia Plateau, where Black and White Rhinos still roam free. Kenya private wildlife reserves promise you the full majesty and mystique of a true “Out of Africa” experience. 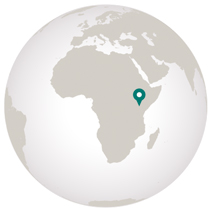 In addition to all tour services from arrival in Nairobi through departure from Nairobi as described in the itinerary, the trip price includes: flights within Kenya, including helicopter excursion, as noted in the itinerary; all gratuities; services of two Apex expedition leaders, plus local guides throughout; and local beer and wine with lunch and dinner daily.

Jonathan is excited to show you the remote, wildlife-packed private conservancies selected for this itinerary. END_OF_DOCUMENT_TOKEN_TO_BE_REPLACED

Marco will share his expertise, and valuable photography tips, as you seek Kenya's abundance of wildlife. END_OF_DOCUMENT_TOKEN_TO_BE_REPLACED

How to distinguish a Black Rhino from a White Rhino

On our Kenya safari, you will likely see both species so it’s valuable to know how to tell them apart. First, Black Rhinos are smaller and more compactly built, versus the substantially larger, barrel-shaped White Rhino. Black Rhinos have two horns that are close in length, while White Rhinos have a long front horn with a much shorter second horn behind it. Their upper lips differ as well. Black Rhinos have a pointed upper lip to help them pull leaves from trees whereas White Rhinos, often seen with their heads hanging towards the ground, have a square-shaped upper lip perfect for grazing. The White Rhino’s more pronounced shoulder hump is yet another way to tell the two species apart.