Geladas are only found in the Ethiopian highlands, with the largest populations in the Simien Mountains. © Jonathan Rossouw

The Hamer women rank amongst the most strikingly regal of all Ethiopia’s South Omo ethnic groups. © Giovanna Fasanelli

The Church of Saint George, a UNESCO World Heritage Site, was the last carved of the eleven medieval monolithic churches in Lalibela. © Giovanna Fasanelli

Located in the town of Aksum, the Church of Saint Mary of Zion is rumored to house the Ark of the Covenant.

At the cultural crossroads of Africa and straddling the Great Rift Valley, Ethiopia is an enigmatic land like no other. The continent’s only country to have avoided Western colonization, it boasts a rare historical depth going back through medieval dynasties and the evolution of a religion to the reign of King Solomon. Awesome stone-hewn churches, medieval castles and great stelae all bear testament to this proud history, eclipsed in grandeur only by its landscapes. From the lofty peaks of the Simien Escarpment and its charismatic, endemic wildlife to the flamingo-studded soda lakes of the Great Rift Valley, and from lake monasteries at the source of the Blue Nile to lip plates, scarification and body painting in the villages of the Omo Valley, this Ethiopia tour reveals a raw Africa at its most dramatic and alluring. 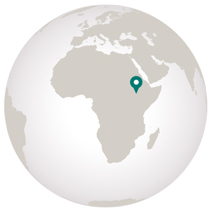 Geladas are native to the Ethiopian Highlands, with large populations found in the Simien Mountains. This attractive, long-haired primate is the only grass-grazing monkey in the world, with over 90 percent of its diet being grass blades. Geladas are well adapted to a life of grazing with their highly opposable thumbs and finely tuned index fingers for plucking grass and seeds along with a reinforced rear end allowing them to sit for long hours while they shuffle around in search of food. Its most striking feature is the hairless, hourglass-shaped pink or red area of skin located on its chest that lends the Gelada the nickname, Bleeding Heart Monkey.