The low and guttural sound produced by Howler Monkeys is believed to be the loudest of all land animals and can be heard over two miles away. © Gary Krosin

This colorful, male Clown Grasshopper Paramastax poecilosoma can be found in the cloud forests of northwest South America. @ Kevin Clement

Besides having the ideal climate and elevation, Colombia is one of the few countries that only grows Arabica beans, resulting in a rich, mild-flavored coffee. @ Metropolitan Touring

Colombia, a country once torn by strife and long closed off from the outside world, is a study in contrasts—from pristine rainforests echoing with bird calls, to lively modern cities like Barranquilla and Bogotá; from snow-capped peaks to verdant coffee-growing valleys; golden beaches to rainbow-colored rivers flowing alongside vast Serengeti-like savannah. Join Apex on this 16-day Colombia tour, carefully crafted to showcase exquisite colonial architecture, ancient ruins and vibrant local culture, as well as stunning natural spaces and wildlife—with more bird species than any other country on Earth. Colombia travel reveals a diverse and friendly country. Now is the time to visit before the rest of the world catches on. 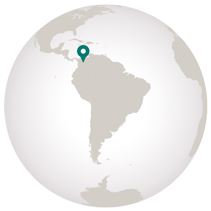 In addition to all tour services from arrival in Bogotá through departure from Bogotá, as described in the itinerary, the trip price includes all gratuities; air within Colombia, including the private charter flights to and from La Macarena, as noted in the itinerary; services of an Apex expedition leader and local guides throughout; plus local beer and wine with lunch and dinner daily.

With its fascinating mix of nature, culture and birdlife, Colombia is one of Kevin’s favorite countries to explore. END_OF_DOCUMENT_TOKEN_TO_BE_REPLACED

Andean Condors are enormous. With a wingspan of over 10 feet, they are considered the largest flying bird in the world. Even with their impressive wingspan, Andean Condors sometimes have a hard time staying aloft due to their hefty size—fully grown adults can reach up to 33 pounds. These birds prefer to live in windy areas where they can use warm air currents, to help them gain altitude. By gliding from thermal to thermal, a condor may need to flap its wings only once every hour. Andean Condors are vultures, using their sharp eyesight to spot a carcass from high in the air. Once their next meal is located, they can wait more than four days for the right moment to start feeding, slowly descending once they are sure they’re alone.