The Komodo Dragon’s preferred prey is the Timor Deer. This large reptile can eat up to 80% of its body weight at a time. © Jonathan Rossouw

The Reef Manta Ray is found mainly near coral and rocky reefs, and feeds by filtering sea water to catch its favorite food, zooplankton. © Giovanna Fasanelli

Dive and snorkel amongst Manta Rays and thousands of colorful reef fish, such as Humphead Wrasse, Giant Trevally, and schools of fusiliers. © Giovanna Fasanelli

After a day of exploring the underwater caves, walls and alleys around Clerke Reef, enjoy a rewarding sunset on the beach at Bedwell Island.

Color abounds on this journey along the coasts and islands of Western Australia and Indonesia. From the red-hued landscapes of the Kimberley, to the kaleidoscopic coral reefs of Australia’s Rowley Shoals and Ningaloo, to the pink sand beach on Komodo Island, this trip is a visual feast, both above and below the water. Dive and snorkel among thousands of colorful reef fish, turtles, sharks, Manta Rays and schools of tuna and Maori Wrasse. Visit exquisite corners of Western Australia’s Outback and see rare Black-footed Rock Wallabies and birds galore. Walk among prehistoric-looking Komodo Dragons on Rinca Island. Join Apex on this 18-day adventure to some of the world’s most vibrant marine environments and coastal parks. 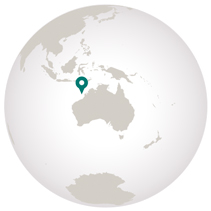 Exceeding 10 feet in length and armed with vicious teeth and long claws, the legendary dragons of Komodo are the island’s apex predators, capable of killing animals the size of wild Water Buffalos! The most startling recent discovery, however, is that in addition to highly infectious saliva, they actually produce a venom that accelerates the weakening of their quarry after the initial attack.