On Easter Island, see hundreds of moai, the monolithic human figures carved by the Rapa Nui people during the 13th–16th centuries. © Giovanna Fasanelli

Oeno Island, a palm-covered gem rising just eight feet above the turquoise ocean, is home to tens of thousands of nesting seabirds.

The 144-guest Silver Explorer is a luxury expedition cruise ship, designed for navigating waters in some of the world’s most remote destinations.

The Red-footed Booby is one of the many seabirds you’ll encounter. Its stick nest is placed in a tree or bush, where one egg is incubated by both adults. © Jonathan Rossouw

Snorkeling in the crystal-clear waters of shallow lagoons will reveal a variety of reef fish, such as this colorful Clark’s Anemonefish. © Giovanna Fasanelli

Travelers, birders, snorkelers, and history buffs alike will delight in this unique and extensive 25-day South Pacific cruise that will sail from Tahiti to mainland Chile. Experience the rarely-visited Austral Islands, all four of the Pitcairn Islands, and Easter Island, then sail on to Alexander Selkirk and Robinson Crusoe Islands before making landfall at Valparaíso, Chile. Along the way, stop at Marotiri, one of the least-visited islands on the planet. This expedition follows the route of the early Polynesian explorers, as well as famed British seamen like Captain Bligh and the HMS Bounty mutineers and Alexander Selkirk, the real-life Robinson Crusoe. Snorkel in turquoise lagoons surrounded by myriad colorful and vibrant reef fish. For birdwatchers, this will be one of the most important voyages of a lifetime with sightings of some of the rarest and least-known seabirds on the planet. Join us on the elegant Silver Explorer, one of the finest and best-run expedition ships afloat, and set out on this Tahiti to Chile journey, a South Pacific cruise without equal. 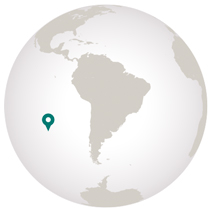 Apex rate includes, as noted in the itinerary, welcome breakfast in Pape’ete; morning touring in Pape’ete; full day tour from Valparaíso to Santiago, including lunch with local beer and wine included; all gratuities and transfers. In addition, the voyage rate includes economy-class air from select cities; an overnight in Pape’ete, as noted in the itinerary; accommodations and meals aboard the Silver Explorer; activities and excursions as described in the itinerary; services of six Apex Expeditions leaders, as well as the full Silversea lecture and expedition staff; all crew gratuities; complimentary room service onboard the vessel; select wines and spirits onboard the vessel; permits; entrance fees; and taxes.

As a seabird expert, Peter is eager to share with you the globally-important seabird islands in the Australs and Pitcairns. END_OF_DOCUMENT_TOKEN_TO_BE_REPLACED

Sighting rare and little-known bird species and exploring seldom-visited islands is the most exciting to Jonathan. END_OF_DOCUMENT_TOKEN_TO_BE_REPLACED

Kevin is fascinated by the variety of nature seen on this voyage, from seabirds and whales to colorful reef fish. END_OF_DOCUMENT_TOKEN_TO_BE_REPLACED

Shirley finds this part of the world intriguing, and enjoys exploring Easter Island, as well as uninhabited atolls. END_OF_DOCUMENT_TOKEN_TO_BE_REPLACED

Having spent much time in the South Pacific, Gerald is looking forward to exploring the Juan Fernandez Islands. END_OF_DOCUMENT_TOKEN_TO_BE_REPLACED

John is excited to share with you the fascinating geological wonders you'll see in these South Pacific islands. END_OF_DOCUMENT_TOKEN_TO_BE_REPLACED

On this voyage, we will encounter some of the rarest, least-known, and least-studied seabirds in the world. One such seabird is the Murphy's Petrel, which nests on rocky islets in the South Pacific. This species qualifies as Near Threatened on the IUCN Red List. Its numbers have been slowly declining within its moderately small range, but the eradication of rats on Oeno and Ducie in the Pitcairn Islands some 20 years ago, has secured the largest populations of Murphy's Petrels. Oeno Island is now home to the second largest Murphy’s Petrel colony in the world, with 25,000 pairs. Ducie Island—perhaps the most important seabird island in the South Pacific—is home to 100,000 pairs, the world’s largest.