Polar bears are the largest land carnivores in the world, feeding primarily on the fat of ice-dependent Ringed Seals and Bearded Seals. © Gary Krosin

A Walrus can stay underwater for 10 minutes on a feeding dive, using its sensitive whiskers to locate a meal of clams, mussels or sea cucumbers. © Gary Krosin

Whale Bone Alley at Yttygran Island consists of over a quarter-mile stretch of immense jawbones and ribs of Bowhead Whales. © Gary Krosin

Aside from Polar Bears, Musk Oxen are the largest animals to roam the Arctic tundra, and can weigh up to 800 pounds. © Gary Krosin

National Geographic Orion was purpose-built for expedition travel, designed for maximum comfort, and engineered to allow for maneuvering close to shore.

Gray Whales swim as far as 12,000 miles roundtrip each year to return to their summer feeding grounds in the Bering and Chukchi Seas. © Gary Krosin

Tufted and Horned Puffins spend most of their lives on the open sea, visiting Chukchi Sea coasts only in the summer months to breed. © Gary Krosin

Historians call it Beringia, the legendary land bridge that once joined Alaska to Siberia. The bridge gave way some 11,000 years ago, but the islands and peninsulas that remain in the Bering and Chukchi Seas still possess a Pleistocene character, down to the Woolly Mammoth remains that continue to crop up on Wrangel Island. The best way to explore this region is on a Russian Arctic cruise, with Wrangel Island travel among the highlights of this world where wildlife reigns. See Gray Whale pods and Pacific Walrus haul-outs off the Chukchi Peninsula; Emperor Geese and puffins on Kolyuchin Island; and Polar Bears thriving on Wrangel Island. Visit the ancient Yupik ceremonial site known as “Whale Bone Alley” on Yttygran Island, and meet some of the native people who call this strange and unforgiving land home. 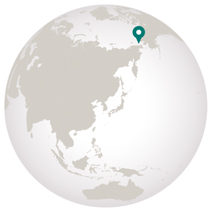 Gray Whales make the longest annual migration of any mammal on Earth, swimming as many as 12,000 miles every year. In October, the whales begin to leave their summer feeding grounds in the cold Arctic waters of the Bering and Chukchi Seas. They swim south during the fall and winter to their mating and calving lagoons in Baja California, Mexico, a journey that takes 2-3 months. Calves are usually born from late December to early February. The mothers and calves will stay in these warm, shallow lagoons for up to 3 months while the calves build up the thick layer of blubber they’ll need to keep them warm during their northward migration back to the Arctic.