At the southern tip of the Andes, Torres del Paine National Park is dominated by the huge massif known as the Cordillera del Paine.

The shores of Patagonia are scattered with large breeding colonies of Magellanic Penguins that return to reclaim their burrow and mate with the same partner year after year.

The Patagonian ice cap in Los Glaciares National Park is the largest non-polar ice field on earth and third largest after Antarctica and Greenland.

Guanacos are humpless camelids of the arid and semi-arid habitats of southern South America.

An important wildlife sanctuary, Peninsula Valdés is a promontory that protrudes 62 miles into the South Atlantic Ocean.

Large, flightless birds of the Patagonian steppe, Darwin's Rheas are one of the South American ratite, relics of Gondwanaland.

If Patagonia really is the “end of the world,” as it is known by adventure travelers, that end is certainly dramatic. This pristine and wild region at the southern-most tip of South America has no shortage of jaw-dropping sights, from the Seussian spires of the Towers of Paine, to the thundering chunks of ice tumbling from the Perito Moreno glacier in Los Glaciares National Park. Its haunting landscapes have been chronicled by the likes of Darwin, W.H. Hudson, and St. Exupéry. Apex Expeditions’ Patagonia adventure tours itinerary will take you to the iconic highlights of this remote region, focusing on the staggering array of wildlife on offer—from the ubiquitous Llama-like Guanaco and the majestic Andean Condor to the ghost-like Puma of Torres del Paine National Park. 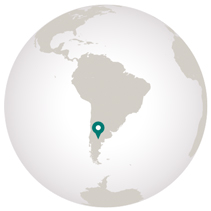 Lama guanicoe, or Guanacos (correct spelling for the plural of “Guanaco”) are humpless camels of the arid and semi-arid habitats of southern South America. Found at elevations up to 14,500 feet, they are related to camels, as are Vicunas, llamas, and alpacas. Found in groups of up to ten females, the young, and a dominant male adult, Guanacos are the largest native herbivore in Patagonia. Their soft, padded feet allow them to tread on soil and vegetation without damaging the environment and they obtain moisture from the vegetation they eat, conserving water like other camels.