Travel in 4x4s across a stunning desert landscape of rippling red dunes, some hundreds of feet high, to your secluded camp at Wahiba Sands.

Explore the maze of rooms at the 17th-century Nizwa Fort, an architectural beauty offering stunning views to those who climb its 130-foot-high tower. © Jonathan Rossouw

Built in the 3rd century BC, explore the rose-hued fortress city of Petra with its palaces, temples and tombs carved directly into the sandstone cliffs.

A dramatic landscape of unique rock formations, natural arches and rippled red sand dunes awaits you at Wadi Rum, the Valley of the Moon.

Between 20,000 and 30,000 Green Turtles return annually to lay their eggs on the protected white sand beaches of Ras al Jinz.

Mystery shrouds Oman, tucked quietly beside nations that make far more headlines, and are far less amenable to travel. Oman travel packs a rich variety of experiences in its narrow borders, from sparkling cities to ancient villages; red dunes to lush, cliff-side orchards. Join Apex Expeditions on this Oman and Jordan tour, brimming in history, architectural marvels, and the wafting scent of perfume. See Green Turtles at one of the largest nesting sites on the Indian Ocean, Bonelli’s and Verreaux Eagles in subtropical Dhofar Province, and ancient Frankincense trees in their natural habitat. Another friendly haven, Jordan offers the awe-inspiring ruins at Petra and floating in the fabled Dead Sea. Step back in history on this expedition through the many layers and landscapes of the Arabian Peninsula. 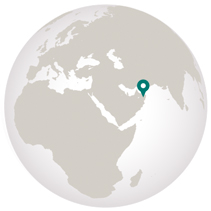 The Land of Frankincense

The Boswellia tree is a stumpy, rather unsightly tree resembling a large tumbleweed. This tree however, better known as the Frankincense tree, produces the most heavenly fragrance. Frankincense is derived from the gummy sap that oozes from the tree when its bark is cut. The leaking resin hardens into translucent, golden-hued crystals that are scraped off the trunk in tear-shaped droplets (also known as Frankincense tears). When dried, the sap is burned as incense and has a lemony, musky scent. Frankincense has been sought after since ancient times, primarily for medicinal purposes and to make incense and fragrances used for burials, sacrifices and important rituals. Today, Frankincense is a symbol of Omani hospitality, its fragrant resin burned to welcome guests throughout the country.