North America’s largest Atlantic Puffin colony nests on the cliffs at Witless Bay Ecological Reserve where you can see over 260,000 pairs present in the summer. © Barrett & MacKay, Newfoundland & Labrador Tourism

Witness the world’s largest population of Humpback Whales that returns each year to feed, frolic and breach in these waters. © Barrett & MacKay, Newfoundland & Labrador Tourism

Moose are typically found on wooded hillsides and along ponds, lakes and rivers where they feed on the leaves of birch and maple trees. © Ken Knowles

Newfoundlanders call their homeland “The Rock,” and it is certainly a fitting name for this craggy outcrop in the northern Atlantic. But a rock is cold and unvaried, two things Canada’s easternmost province isn’t. Join Apex on a 15-day Newfoundland & Labrador tour through this stunning region, feel the warmth of its people, and hear an English so different it has its own dictionary. The surprising diversity of its landscapes will leave you speechless as you travel the region and find strange geological phenomena, icebergs drifting past on a summer day, and fjords with walls so steep you’d think you were in Norway. Explore Battle Harbour, Labrador, where distance from the modern world can be measured in both miles and years. See huge numbers of Moose, whales and breeding seabirds. Immerse yourself in this spectacular and most-unique Canadian province. 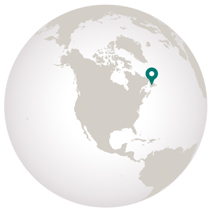 Walking on the Earth’s Mantle

Gros Morne National Park in western Newfoundland holds UNESCO World Heritage Site designation for its geological wonders, which contributed greatly to the world’s understanding of plate tectonics. Geology here marks a time when the continents of Africa and North America collided, pushing rocks, originally beneath the ocean, to their present position. In fact, the Tablelands at Gros Morne are the remains of an ancient ocean floor that existed 500 million years ago. The barren landscape is made predominantly of peridotite—a rock that lacks the usual nutrients required to sustain most plant life. This is one of the only places in the world where you can see—and walk on—the Earth’s mantle.