The largest of all felids, Bengal Tigers are powerful, solitary hunters . © Jonathan Rossouw

The Indian Roller is a sit-and-wait hunter of open habitats across South Asia. © Jonathan Rossouw

The strictly vegetarian Gray Langur is also known locally as Hanuman Langur, a reference to the humanoid deity who was an ardent devotee of Rama. © Jonathan Rossouw

One of the most striking of all pheasants, the Indian or Blue Peafowl (Pavo cristatus) is entirely restricted to the Indian sub-continent. © Giovanna Fasanelli

Travelers throughout history have feasted their senses on India’s intoxicating mix of fascinating culture, dramatic landscapes, and abundant wildlife. In this comprehensive 16-day India & Nepal Wildlife Safari Tour, Apex Expeditions takes you from the bustling bazaars of Delhi to the tranquil teak forests of Madhya Pradesh; from tracking tigers in the jungles of the Deccan Plateau to elephant-back safaris in search of Indian Rhinoceros at the foot of the Himalayas; from a dawn cruise on the Ganges at Varanasi, most holy of Hindu cities, to a sunset visit to Boudhnath Stupa, Nepal’s largest Buddhist monument. While our primary focus is the charismatic megafauna of the Indian Subcontinent, our journey exposes us to the incomparable cultural and scenic diversity of this ancient land. 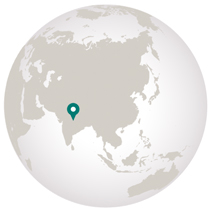 Largest of the three Asian species of horned pachyderms, the Greater One-horned Rhinoceros is one of the world’s most impressive animals. In addition to the single, thick horn of keratin that gives it its name, this gigantic animal sports heavy, armor plate-like skinfolds that only enhance its strangely prehistoric appearance. One-horned Rhinoceros have seen their range reduced to a few tiny remnants, islands of habitat in a sea of humanity. Watching these behemoths wallow in their mudbaths, as the dawn mists lift off the elephant grass, is like stepping back in time.