The Male Magnificent Frigatebird has a bright red gular pouch that can be inflated when breeding to attract a female. © Silversea

The Waved Albatross mates for life, and each year performs an elaborate mating dance to ensure they have the right partner. © Jonathan Rossouw

The Galapagos Sea Lion is playful and inquisitive. Snorkelers may have the chance to observe their graceful underwater acrobatics.

The Giant Tortoise is the world's largest tortoise. They can reach five feet in length and more than 500 pounds. © Jonathan Rossouw

Aboard the luxurious Silver Origin, you’ll enjoy the highest crew-to-guest ratio in the Galápagos, along with a team of Ecuadorian national expert guides. © Silversea

Española Island is home to the only Marine Iguana population that retains its bright red and green coloration throughout the year. © Jonathan Rossouw

An amphibian expends a great deal of energy caring for its skin because it is through this organ that they can breathe and absorb water. © Jonathan Rossouw

The open-air Dragonfly Gondola at Mashpi Reserve offers an aerial perspective of the unique forest ecosystem below. © Jonathan Rossouw

Endemism is the focus of this journey, and nowhere on Earth teaches you more about it than Darwin’s living laboratory, the islands of the Galápagos. Isolated as they are, animals here have developed unique traits, most endearing of which is a total absence of instinctive fear of humans. Travel aboard the Silver Origin, purpose built for travel in the Galápagos archipelago, and find yourself up close and personal with iconic Flightless Cormorants, regal Waved Albatrosses, comical Marine Iguanas, warm-weather penguins, and the Giant Tortoises that give the islands their name. See magnificent lava formations and meet the lucky souls who call these remote specks of land home. Before arriving on the archipelago, immerse yourself in the biological diversity of one of the world’s richest rainforests, the Chocó, at Mashpi Reserve, where new endemic frog and orchid species have just been discovered. Watch evolutionary principles at work in real time on this enlightening adventure to the Galápagos Islands and Mashpi. 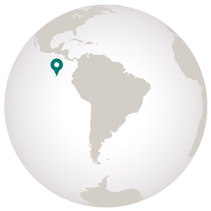 The Apex rate includes, as noted in the itinerary, accommodation at Casa Gangotena in Quito for two nights, and Mashpi Lodge for three nights, all meals in Quito and at Mashpi, with local beer and wine included; all activities and excursions in Mashpi, as described in the itinerary; and all gratuities. In addition, the voyage rate includes economy-class air from select cities; accommodations onboard Silver Origin; activities and excursions as described in the itinerary; flights from Quito to San Cristóbal and San Cristóbal to Guayaquil; services of two Apex Expeditions leaders, as well as the full onboard Silversea lecture team and expedition staff; dayroom in Guayaquil; all meals and beverages onboard the vessel (except certain premium brands of alcohol); all gratuities, permits and entrance fees.

Peter will share his passion and knowledge of the seabirds you’ll find throughout the islands. END_OF_DOCUMENT_TOKEN_TO_BE_REPLACED

Jonathan is looking forward to exploring the biological diversity of the Galapagos with you, both above and beneath the waves. END_OF_DOCUMENT_TOKEN_TO_BE_REPLACED

How the Islands Got Their Name

The Giant Tortoise is among the most famous animals of the Galápagos Islands. In fact, the islands were named for them—the old Spanish word galapago meant saddle, a term early explorers used for the tortoises due to the shape of their shells. These reptiles are among the longest-lived of all land vertebrates, averaging more than a hundred years. They are also the world's largest tortoises. There are two main types—domed tortoises, which live in the cooler regions of the archipelago where food is abundant, and saddle-backed tortoises, which live in dry, coastal environments. Saddleback shells have a flared front opening that allows the animals to extend their heads to reach higher vegetation, such as cactus pads.