onboard 50 Years of Victory

Join your fellow passengers and soak in the view from 90 degrees North, where your ship will ceremoniously drop anchor on a sturdy stretch of ice. © Poseidon Expeditions

The most important habitats for polar bears are the edges of pack ice where they can find the greatest number of seals.

50 Years of Victory, the world’s most powerful icebreaker, will be your home away from home during this Arctic adventure. © Dietmar Denger

Pacific Walruses are very social animals and tend to congregate in large numbers. Their total population has rebounded to more than 200,000. © Poseidon Expeditions

Helicopter excursions and Zodiac trips take full advantage of the near 24-hour daylight to ensure you the best chances for viewing wildlife. © Lauren Farmer

Polar Bears are uniquely suited to life in icy habitats. Their fur is thicker than any other bear and even covers their feet for warmth and traction on ice. © Dietmar Denger

If there is one geographical coordinate that has the power to excite a traveler’s wildest dreams, it has to be 90° North: the top of the world, the terrestrial North Pole. Join Apex Expeditions on a North Pole cruise aboard the world’s most powerful nuclear icebreaker, 50 Years of Victory, as it slices through pack ice to reach the very apex of the earth. Ride the ship’s helicopter to gaze out over the icescape. Stand at the North Pole and look south in all directions. Then, visit Franz Josef Land in the Russian Arctic National Park to see Walrus, Arctic Fox, seals, whales and the king of the ice, the mighty Polar Bear, where they are all still thriving. Most of the year, 50 Years of Victory pilots scientific and cargo ships to the farthest reaches of the Arctic with only a narrow window in summer when it escorts a few fortunate explorers on a North Pole expedition. 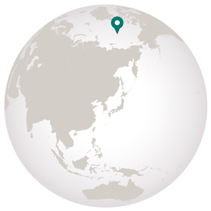 The Top of the World

The northernmost point on Earth, the geographic North Pole sits in the middle of the Arctic Ocean. There is no land at 90 degrees north, but an ice sheet that is approximately 6-10 feet thick floating over water that is more than 13,000 feet deep. As the drifting ice is an unpredictable habitat, Polar Bears and other terrestrial animals rarely migrate to the North Pole. Migratory birds, however, are frequent visitors—fulmars, kittiwakes and snow buntings can be spotted. The North Pole experiences only one sunrise, at the March equinox, and one sunset, at the September equinox each year. In summer, the sun is always above the horizon resulting in 24 hours of sunlight, while in the winter, the region experiences 24 hours of darkness.