Red Pandas can be identified by their unique ruddy coat color, which acts like camouflage where branches are covered with clumps of reddish-brown moss and white lichens. © Jonathan Rossouw

The Tibetan Macaque’s long, thick fur is especially dense around its ears and the top of its head for protection against the cold. © Tang Jun

Native to forests in China’s mountainous areas, the Golden Pheasant is one of the most brilliantly colored birds, with a golden-yellow crest, bright red body, and long tail. © Jonathan Rossouw

The Tibetan Fox lives in the high-altitude grasslands of the Tibetan Plateau. Mated pairs remain together for life, hunting and raising their young together. © Tang Jun

The Greater Hog Badger is a nocturnal creature with powerful jaws, and large, heavy claws, which are used to dig for food and construct underground dens. © Tang Jun

For wildlife enthusiasts, China’s irresistible attractions lie in its natural realm, and no other region offers the alluring mix of diversity and concentration of Chinese wildlife than Sichuan province. Lying at the very heart of this vast country, Sichuan straddles the snow-capped Hengduan Mountains that connect the low-lying Red Basin to the lofty Tibetan plateau. From subtropical foothills through bamboo-choked temperate forests to alpine grasslands and dramatic snow-capped peaks, this is the legendary home of Giant Panda and fabulous pheasants, Golden Takin and Pallas’s Cat. If the mystique of China’s wildlife quickens your pulse, join Apex on a China nature tour to some of the grandest landscapes on Earth! 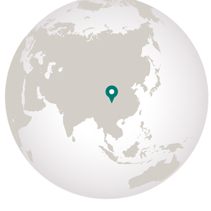 In addition to all tour services from arrival in Chengdu through departure from Chengdu, as described in the itinerary, the trip price includes all gratuities; services of two Apex expedition leaders, plus local guides throughout; plus local beer and wine with lunch and dinner daily.

Kevin is excited to explore the rich landscapes of Sichuan province and the diversity of wildlife that calls it home.

END_OF_DOCUMENT_TOKEN_TO_BE_REPLACED

The Red Panda and Pallas’s Cat are at the top of Gerald’s list to seek on this China wildlife quest.

END_OF_DOCUMENT_TOKEN_TO_BE_REPLACED

The Skillful and Acrobatic Red Panda

Red Pandas or “fire foxes” are slightly larger than a domestic cat with a bear-like body and thick red fur. They spend most of their lives in trees, and while classified as a carnivore, eat mainly bamboo leaves. Like the black-and-white giant that shares its name, Red Pandas have an extra “thumb,” which is an enlarged bone used for grabbing bamboo stems and tree branches. They have sharp claws like a cat and fur covering the soles of their feet, which is believed to add extra insulation from the cold and help grip onto slippery, mossy branches. In fact, Red Pandas are one of the few animals on the planet that can climb straight down a tree, head-first.