The ruins of the once-epic city of Tiwanaku are windows into the pre-Inca civilization thought to have existed between 300 BC and AD 300. © Jonathan Rossouw

A peculiar Amazonian resident, the Hoatzin has a unique digestive system amongst birds, using an enlarged crop for fermentation of leaves, flowers and fruit. © Jonathan Rossouw

The Southern Viscacha is found in the rocks and crags of Bolivia’s mountains and although they more closely resemble rabbits, they are chinchillas. © Jonathan Rossouw

Salar de Uyuni is estimated to contain 10 billion tons of salt, of which less than 25,000 tons is extracted annually. © Jonathan Rosssouw

“Dizzying” is an apt adjective for Bolivia, and not merely because of the light-headed feeling one gets touching down in 12,000-foot-high La Paz. To explore this country is to encounter wildly diverse and dramatic landscapes and cultures: from the stark Andean Altiplano to the wildlife-rich lowlands of the Amazon river basin; from Lake Titicaca, the continent’s largest lake, to the earth’s largest salt flats in Uyuni; and from the thriving indigenous community in Tarabuco to the harsh existence of silver miners in Potosí. On this 17-day Bolivia culture and nature tour with Apex, you’ll experience an astonishing variety of people, wildlife, and historic sites in the geographic heart of South America. 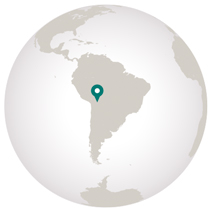 In additional to all tour services from arrival in La Paz as described in the itinerary, the tour price includes flights La Paz/Rurrenabaque/La Paz, La Paz/Uyuni and Sucre/La Paz, as noted in the itinerary; services of an Apex Expeditions leader and local guides throughout; all gratuities; and local beer and wine with lunch and dinner.

Bolivia truly has an amazing collection of natural features. There’s the highest navigable lake in the world, Lake Titicaca, at 12,507 feet and dotted with 41 islands. Salar de Uyuni stretches for more than 4,500 square miles and is the world’s largest salt flat. Uyuni’s large area, clear skies, and the exceptionally flat surface creates optical illusions and offers fantastic photo opportunities. Madidi National Park includes glacier-covered Andean peaks as well as tropical rainforest. This variety of ecosystems offers a staggering wealth of biological riches with 4,739 species of plants, 1,370 species of vertebrates and the highest number of bird species in the world.