An architectural feat of the 14th century, Georgia’s Gergeti Trinity Church is perched at 7,000 feet under towering Mount Kazbek.

Mukhrani, "decorated with oak trees," is one of the most beautiful Georgian villages. The vines at famous Château-Mukhrani have been cultivated for centuries.

A vital hub of trade along the Silk Roads since the Middle Ages, the ancient Azerbaijani city of Sheki is now a UNESCO World Heritage Site

Perched on the banks of the Mtkvari River, Georgia’s vibrant capital of Tbilisi is one of the world’s oldest settlements, dating back to 4,000 BC.

Churchkhela is a traditional Georgian candy made on a string with walnuts or hazelnuts, then dipped into a thick mixture of grape juice.

For centuries, Silk Road traders crisscrossed these legendary lands at the intersection of Europe and Asia, and their diverse influences remain on full display. Journey through the Caucasus, home to prehistoric rock carvings, medieval cathedrals and elaborate caravanserais, on an 18-day tour of Azerbaijan, Georgia, and Armenia. Discover natural sites teeming with rare birds—highly sought after due to their small global range—and visit jaw-dropping mountain villages virtually untouched by the modern world. Explore ancient fire worship in Azerbaijan. Tour vineyards at the birthplace of wine in Georgia. Visit fourth-century monasteries in Armenia. Delve into colorful history in the key cities of Baku, Tbilisi and Yerevan. See the splendor that’s been revealed as these countries have shed their Soviet past and embraced their rich and unique cultural history. 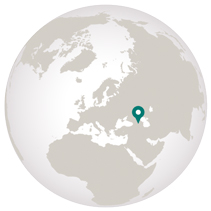 In addition to all tour services from arrival in Baku through departure from Yerevan, as described in the itinerary, the trip price includes all gratuities; services of two Apex Expeditions leaders, plus local guides throughout; local beer and wine with lunch and dinner daily; and airport transfers.

Kevin will share his knowledge and fascination for the rich history, exquisite architecture, cultural influences, and natural wonders of the Caucasus region. END_OF_DOCUMENT_TOKEN_TO_BE_REPLACED

Gerald is thrilled to experience a variety of birding opportunities with you, from the migratory water birds of Tbilisi to the high-altitude birding near Stepantsminda. END_OF_DOCUMENT_TOKEN_TO_BE_REPLACED

An Ancient Civilization near the Caspian Sea

In 1939, a fascinating discovery was made in a plateau of rocky boulders rising out of the semi-desert of central Azerbaijan. Over 6,000 rock carvings were found, depicting the flora, fauna, lifestyle, and religious beliefs of a civilization that once lived by the shores of the Caspian Sea. Now a UNESCO World Heritage Site, Gobustan is best known for these perfectly preserved petroglyphs, dating back nearly 15,000 years—from the end of the Upper Paleolithic era to the Middle Ages. The petroglyphs, carved into blocks of stone, include human figures, animals, hunting, ritual dances, boats, warriors, and celestial bodies.